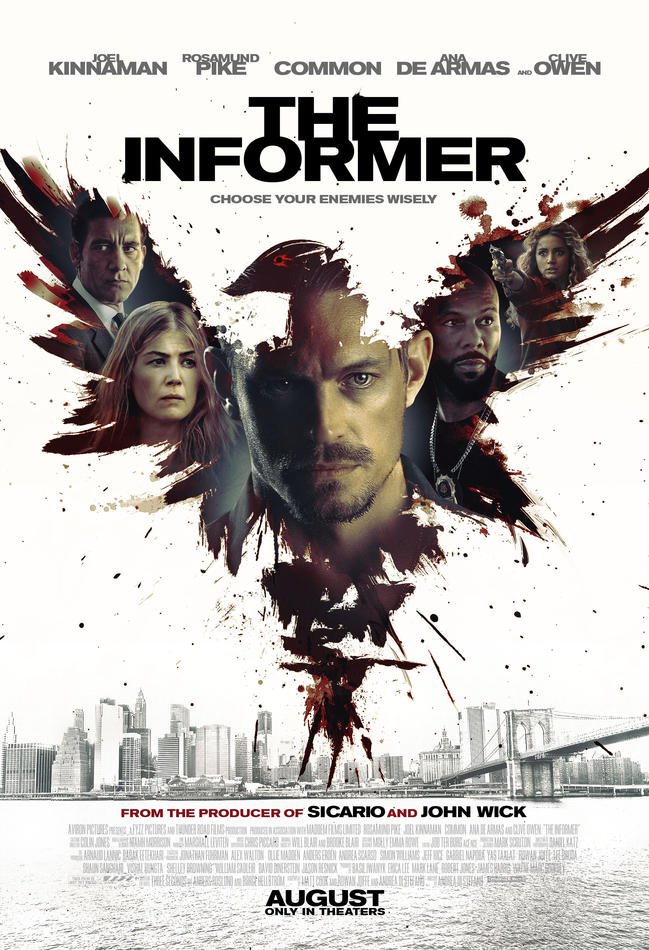 The Informer is based on Roslund & Hellström’s Three Seconds, directed by Andrea Di Stefano and written by Matt Cook. It stars Joel Kinnaman as the title character, alongside Rosamund Pike, Common, Ana de Armas and Clive Owen.

“The Informer does its triple crosses, action sequences and prison yard scenes with a competent hand … See this if you like well-cast crime thrillers that start with a bang and boil for almost two hours.”
-The Namibian (Namibia)

“Directed by Andrea Di Stefano and adapted from Anders Roslund and Borge Hellström’s best-selling novel Three Seconds, the film is a gripping and compelling tale that is full of tense twists and turns … a solid thriller that genuinely keeps you on the edge of the seat throughout … [The film] has a raw and gritty feel and is engaging till the very end.”
-Telangana Today (India)

“Raw, gritty and engaging … Directed by Andrea Di Stefano and adapted from Anders Roslund and Börge Hellström’s best-selling novel Three Seconds, the film is a gripping and compelling tale that is full of tense twists and turns … a solid thriller that genuinely keeps you on the edge of the seat throughout … engaging till the very end.”
-Outlook (India)

“Gritty and gripping … The set action pieces, especially inside the prison, are intense … this thriller is well worth a watch.”
-The Free Press Journal (India)

“The mere opening salvo of The Informer contains nearly enough plot to keep many a lesser shoot-’em-up exercise occupied for an hour or two: Just 10 minutes into Andrea Di Stefano’s undercover-mission-turned-prison-break-thriller, a family has been set on the run, an FBI bust on a Polish drug cartel has gone tensely awry, a character’s identity has been neatly pulled out from under us, and a cop has been shot dead … The tic-tac-toe game of double- and triple-crossings is busy but coherent … Tech credits are uniformly proficient … The quality is prickly and effective.”
-Variety (US)

“A movie with a lot of adrenaline, exciting from beginning to end. Nail-biting as Di Stefano’s Escobar.
-Vanity Fair (Italy)

“It’s pulled off with slick effectiveness and has enough bumps in the road to demand your attention to the end.”
-The Times (UK)

“Joel Kinnaman stars in a sharp, cunning crime thriller …The Informer is one of the year’s more pleasant genre surprises: a clenched fist of a crime thriller in the mode of The Departed or The Town, in which every element is just a notch smarter than you’d expect ..  it holds together absorbingly, thanks to a sturdy script which ups stakes and adds characters with cunning and intelligence … While gritty genre fare gravitates more and more to the small screen, it’s strangely satisfying to watch two hours spent doing business the old way.”
-The Telegraph (UK)

“The Informer is a slickly executed tale of one man battling a fundamentally corrupt system … Adapted from the novel Three Seconds by award-winning duo Anders Roslund and Börge Hellstrom, The Informer drip feeds us suspense as a heavily tattooed ex-con calls upon his training as a Special Forces operative to meet violence and intimidation with precisely targetted retribution … Absorbing crime thriller … The script, co-written by Di Stefano, Matt Cook and Rowan Joffe, neatly slots into place the whirring cogs of a well-engineered plot.”
-The Irish News (Ireland)

“Gripping tale of brawn and bloodshed behind bars … a gritty crime drama that drips with menace … The Swedish crime novel Three Seconds by Anders Roslund and Börge Hellström has been relocated to modern-day New York in this big, chewy and sometimes indigestible drama thriller from director Andrea Di Stefano … This is a tough, muscular, sweaty thriller … The rapper and actor Common gives a strong, plausible performance as NYPD detective Grens.”
-The Guardian (UK)

“Brilliant performances from a number of the cast, including Kinnaman and Pike, who, when cast in the correct roles, burst through the screen in a display of conviction and authenticity … Common also gives a powerful portrayal of NYPD Detective Grens, injecting some morality into the corrupt underbelly of the city … The Informer is an unbearably tense and gripping portrayal of the criminal underworld both behind bars and out on the streets. Broken into two parts, outside and inside the prison walls, the film maintains its upwards trajectory to an inevitable bloody climax, stimulating a genuine feeling that no one is safe in Koslow’s world … A dark, fun, well-acted popcorn movie all the while.”
-The Upcoming (UK)